Which String Instruments are used in Indian Classical Music: History, Origin and Facts about them

Sitar
The invention of the Sitar is commonly credited to Amir Khusrau, a courier of Allauddin Khilji in the 13th Century. The name Sitar was derived from Persian ‘Sehtar’ meaning ‘three strings’ which the instrument originally had. But the modern Sitar has seven strings fastened to the pegs on neck and the sides. Sixteen to twenty-two frets are secured to the finger board by pieces of gut.

There are also 11 to 12 sympathetic strings below the frets, running parallel to the main strings. The instrument is played by means of a wire plectrum worn on the forefinger of the right hand. It was instrumental in introducing western audiences to Indian Classical Music.

Sarod
Although the origin of the Sarod is not known, it is supposed to have descended from the rabab of the Middle East. Some believe that this stringed instrument might have originated from the Greco-Buddhist area of Gandhar (modern Afghanistan).

The modern Sarod is made of wood with one end being rounded and covered with parchment. There are six main metallic strings fastened to pegs at the neck of the instrument. It is played with a plectrum held in the right hand while the fingers of the left hand are used to play the notes. It is fretless instrument with sympathetic strings. Sarod has secured an important place in Hindustani Classical Music for its deep and rich tone and a distinctive sound.

Sarangi
Sarangi is another stringed instrument mainly popular as a folk instrument and probably made it’s first appearance in the late 17th Century. 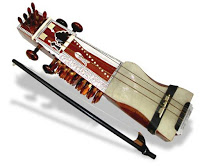 The ability to play all types of gamakas gave it prominent place in Hindustani Classical Music. It is made of hallowing out a single block of wood and covered by parchment and has four strings. Four tuning pegs are fixed to the hollow head and a bridge is placed on the hide-covered belly in the middle. The place places the instrument on the lap and plays it with a horse hair bow in the right hand and fingers and nails of the left hand. The tone of the Sarangi is very near to the human vocal chord.

Santoor
Santoor, which originated from the Vedic Vana Veena, is characteristic of the Kashmir Valley and is neither seen nor played anywhere else. The Vana Veena also had strings and was played with sticks. The modern Santoor is made of a trapezoid wooden box.

There are thirty bridges and a set of four strings of metal, tuned to the same note, is stretched over each pair of the bridges. It is played with a pair of flat wooden pieces curved at the striking ends. Today, Santoor is played with all Indian ragas and is very popular with film musicians.