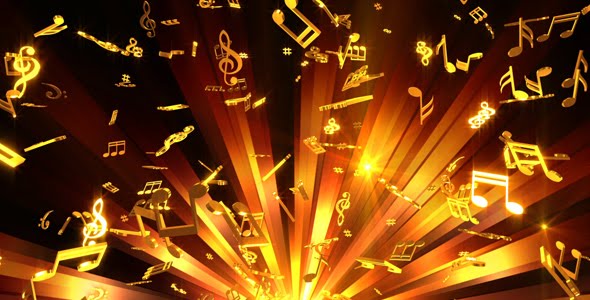 The Mridangam is perhaps the most highly developed and the most ancient of all percussion instruments. It is commonly used in the south as an accompaniment to the vocal and the instrumental performances. It literally means body of clay. The southern Mridangam is a cylindrical hollowed out block of wood Skin covers the opening ends and is fastened the leather hoops held taut by interlaced leather braces.

A wide variety of tones are obtained from different parts of the instrument. For instance, the head can be struck with a full hand or with the fingers, which are clamped or released. The types of strokes are distinguished by an elaborate percussion terms. The alternation of sounds between two heads of the Mridangam further enhances the tones.

Ghatam, on the ancient percussion instruments, often head in Carnatic Music concerts, is a mud pot carefully kneaded and uniformly fired. The mouth of the Ghatam is open and is played with two hands, writs, fingers and nails. 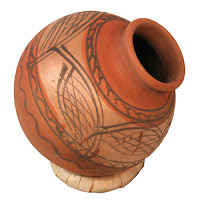 The mouth is pressed against the stomach so that when strokes are, the air inside is set in vibration and gives a deep tone. The player can elicit various volumes and tonal colors by giving the fingers strokes at the neck, center and bottom of outer surface.

Tabla
A pair of drums called the tabla accompanies most Indian classical performances. According to ancient Hindu legends, Shiva (the god of music and dance) invented the drums. One story says that in the deep crevasses of the Himalayan glaciers, one often hears the Thud of heavy ice boulders falling down. These noises are believed to be from Shiva’s drum. 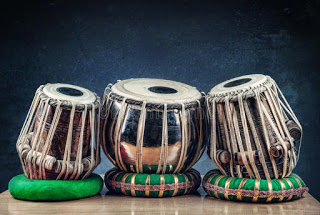 The right-hand drum is called the Tabla and the left-hand drum, which is lower in pitch, is called the Bayan. The combined name for these drums is Tabla-Bayan. The tabla drum can be tuned by adjusting the tension of the head skin by moving the corks on the side of the drum’s body.

The drums are made by a stretched layer of skin on the top, with a round black circle in the middle, made from a past of iron filings and rice powder -the thicker the powder the lower the pitch of the drum. The tabla can make more than two sounds. The player can produce varied sounds by striking the head in different places with his fingers or with the palm of the hand. These sounds are taught through a drum language called Tabla Bols.