Which wind instruments are used in Indian Classical Music: History, Origin and Facts

Considered to be an auspicious instrument, shehnai belongs to the category of Aerophonic Instruments. It is said to be of Persian origin and is a one reed instrument with six holes yielding soft and melodious sound.

Made of a smooth dark-grained black wood, the tube is narrower on the top and widens towards the bottom affixed in a cup. All the tunes of full tone, half tone and sharp notes can be played on this instrument through breath control. The notes are continuous and is generally and is generally used in classical and light classical music.

This wind instrument of ancient India was very common with Lord Krishna and religious music of the Buddhists. Even the frescoes of Ajanta and Ellora depict this flute or Bansuri as an accompaniment to vocal and instrumental music. Being an instrument of great antiquity, it’s construction has remained constant over the years.

It is made of a cylindrical bamboo pipe of uniform bore, containing six holes for movement of fingers and bigger holes for blowing air. It is handled in an oblique position and air blown with the upper lip into the many holes. Different octaves are produced by covering the holes with the fingers.

It is believed that this representative of the south Indian Music evolved from the snake charmer’s Pungi Nagaswaram was well known in the 15th and 16th centuries and formed an integral part of the temples. It consists of a wooden mouthpiece into which the player blows the air. 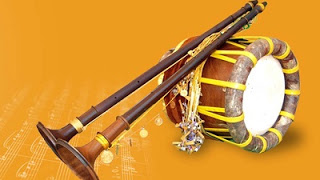 This air under pressure is released from the lower end of the gourd through two bamboo or metal pipes. These tubes have a valve each to control air flow through the pipes and have holes to control the melody. Nagaswaram often attains a wild beauty and softness and brings out the subtle graces of Carnatic music.